Well today the sun was beating down, the sky was clear and the gas canister was full. Our new BBQ had not been tried out but I had also promised Maggie a proper Sunday dinner. 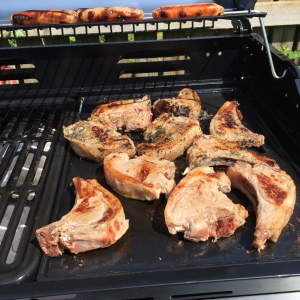 A healthy compromise was achieved and a good meal was enjoyed by all.

A pile of lamb chops had been residing in our freezer for several months and had defrosted over night. The majority were coated in mint sauce and left to marinade for a few hours. The remainder were left nude as Reuben is not a fan of mint sauce.

The BBQ was fired up and the chops were cooked on a hot plate. A few ‘less than healthy’ sausages were also put on for the boys.

These were served with roasties (par boiled, sprayed with 1 calorie spray and roasted in a hot oven), salad and couscous flavoured with veg stock and ras el hanot spice mix. 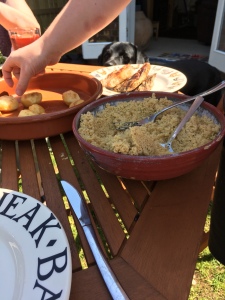 The only thing to avoid (other than the sausages) to keep it healthy, was the fat on the chops otherwise it was a great, balanced and healthy meal topped up with late spring sunshine.