This one is adapted from a Slimming World recipe. The original was designed to be one made to take to work as a stand alone meal. This one works as both a work day lunch or a family supper and was adapted around what was in and what I fancied eating. 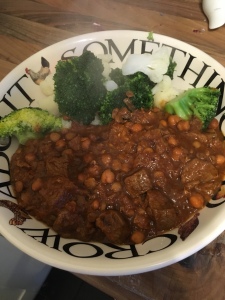 My youngest son, who is not the most adventurous when it comes to his food, said that he would have that again, even if it was rather spicy. This counts as a hit, especially as I served his with a big mound of mash. I had mine with a selection of veg so that I could have a low carb meal.

Rather than write this as a recipe with method I will talk through the process as it is a good technique and one that I am adding to my arsenal.

The base of the sauce is a mixture of tomato, peppers, onions and garlic. I used 6 tomatoes (halved), 2 medium red onions (cut into wedges), an orange pepper (descended and quartered) and four cloves of garlic skinned but not chopped.

These were roasted in a medium/hot oven at about Gas Mark 7 / 200 Celsius for thirty minutes.

These were then added to 700ml beef stock in a sauce pan with 1/2 tbsp of harrisa spice mix, 1 tsp paprika, 1 tsp dried thyme and 1/2 tsp chilli flakes. The mix was brought to the boil and then simmered for twenty minutes.

The mix was then blitzed in a food processor. Obviously stick blenders etc can be used equally well.

I prepared my lean beef in a large pan, sprayed with fry light. The meat was browned and then 1/2 tbsp of harrisa spice and a good dollop of Passata was added and the meat was cooked until the sauce had reduced to a thick paste sticking to the beef.

The sauce mix was then added to the beef along with a can of chickpeas and the equivalent of a can of cooked lentils. I cooked a good handful of lentils myself to add as I only had dried in.

The entire mix was cooked over a low heat although this would be a great combination to put in a slow cooker during the day to come home to.

The finished product was a really delicious meal. There are plenty of options to personalise this. You can make it vegetarian with veg stock, no meat or a meat alternative like Quorn.

Chicken or lamb could be used as an alternative to the beef. Choice of colours of pepper are entirely yours. Probably, like me, you will use the one you have in.

My choices were based on what I had in and needed using. The lean beef pieces had been brought a few days earlier and needing eating up. I have already mentioned why I chose dried lentils (in that I didn’t, it was what I had in).

Everything else is supported by keeping a good stock of base herbs and spices.

What this recipe guarantees is a thick and full sauce without any need to use a thickener and packed full of veg.

I also recently made a sort of cassoulet using gammon steaks chopped instead of lardons and sausages. Again this was a case of looking to use what was in a way that would tickle the tastebuds. This was also a goodie. 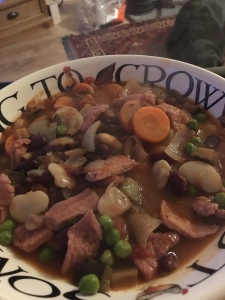