To give my Facebook friends a rest I thought I would come back to the issues in my last post by looking at some of the recipes I have tried, using meat alternatives.

My favourite currently uses aubergine. My confession is that I don’t really like aubergine. However I am realising that is mainly because I have only experienced it in the Moussaka type dishes.

I get cooking ideas from many sources and then adapt those I like to suit my tastes, our tastes or our waistline needs. I recently saw a Nigella episode and she made a chilli and tortilla dish using a mince and aubergine mix. It look stupendous and converting the main chilli mix to a healthier version would be pretty straightforward.

The technique is easy. Instead of using 500g of low fat minced beef to make a chilli I used 250g of minced beef and, once the beef has browned, onions softened etc, I added an aubergine chopped into small cubes and my tin of tomatoes. You will all have your own chilli recipe and so I will not give details on spicing, beans and other veg used. It is just important to note that the aubergine does not go in with the mince at the beginning.

What you get is a chilli with a richer flavour, slightly softer texture and plenty for four people.

Other dishes using minced meat are equally easy ones for reducing the quantity of meat with out losing the flavour you want.

These burgers and meatballs were made using 300g of pork mince and 300g of beef mince. These were put in a food processor with a large chopped onion, a large roughly chopped courgette, two eggs and some salt and pepper. I always blitz my mince mixes for these sort of dishes so that I get a smoother and well mixed finish.

The mix easily made 8 burgers and 20 meatballs (two meals for four people).

You can add other ingredients like fresh coriander, grated carrot, chopped mushrooms and roasted peppers (and anything else you fancy) to get different flavour combinations. Also don’t forget chillis and tomato purée. Using the food processor then smooths out the mix.

I do often use alternatives to rice and pasta. This is partly because I quite enjoy them but also when I have an indulgent couple of days it helps me get back on track.

The last one for today is using finely chopped mushrooms (mushroom mince) alongside minced beef to make cottage pie. I have also used mushrooms as a complete alternative to meat when the fancy has taken me. The mushrooms add a really meaty flavour and a good level of texture. This version also used sweet potato mash which is a tasty alternative to potato mash for anybody trying to reduce the number of regular potatoes they eat or just because you like sweet potatoes.

The mushrooms were not as finely chopped as I normally do but it worked just as well. 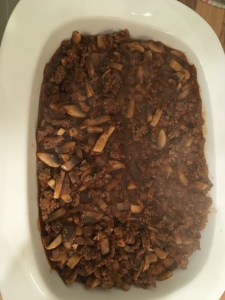 It is worth noting that I also use meat stock cubes/pots to add flavour as well as healthy levels of herbs, spices and ground pepper. These are obviously done to your personal taste and the dish you want to make.

Don’t get sucked into buying ready prepared chopped veg. This is a very expensive way of doing things, it doesn’t take that long to prepare. A large box of ‘wonky’ mushrooms can be pulse zapped in a food processor in a few seconds to make enough mushroom mince for two meals mixed with mince.