This was one of those ‘Use what is in!” dinners. I have written up the recipe in a different way and would some appreciate some feedback on how easy it is to read/follow it compared to the more standard version.

This meant I had half a butternut squash, some green beans heading towards no longer edible, a handful of cherry tomatoes, a handful of mushrooms and a small pot of grated Parmesan left over from making a risotto.

The more plentiful supplies were some chicken breasts, frozen in portions, a pack of unsmoked back bacon, a couple of lemons and some Maris Piper potatoes, to which was added a bundle of asparagus that was bought (just because we fancied some).

I made no use of salt or pepper so all the flavour came from .

As I was creating it on the hoof I was a little liberal with my pan usage but with timing this can be done with 1 pan, a baking/roasting tray and tin foil. 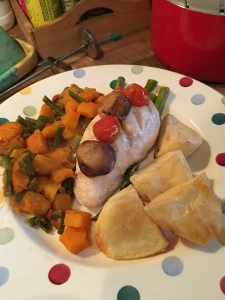 Step 1: Par boil enough potatoes to make enough roasties for everyone. You know your family likes in terms of portion size. I made four per person but three would have been enough (not whole potatoes. I cut each medium/large size potato into at least four pieces). Once cooked leave to cool, they roast up better that way.

Step 2: Prepare the Chicken parcels. trim one piece of back bacon per person, removing all the fat. On a sheet of tin foil layer the bacon on top of four/five asparagus sticks. Place the chicken breast on top and slice it several times diagonally. Spray the surface of the chicken with spray oil ( I used butter spray) and sprinkle the surface with grated Parmesan. Finally lay a combination of cherry tomatoes and/or mushrooms along the top, spray a couple more times and fold in the tin foil to make a sealed parcel (crimped along the top and ends folded in and crimped).

Step 3: Spray the potatoes with oil spray shaking and mixing them each time between a couple of sprays. This should coat the, reasonably evenly without using excess oil. I cooked mine in my air fryer but you can do them equally well in an oven. I would heat the roasting/baking tray first if you are as this will help the underside crisp up. These need to go into a hot oven or a hot air fryer for about thirty to forty minutes. Let them cook long enough to be the colour you like, turning them very fifteen minutes if in the oven or shake the basket in the air fryer.

Step 5: Peel and chop the butternut squash into small cubes. Trim and chop the green beans into pieces about 1 cm long. Put these in a pan of hot water to cook until soft (you can use the potato pan again).Halve and deseeded a red pepper. Slice the halves into thin strips, cutting across the width and juice two lemons. After fifteen to twenty minutes the squash and beans will be cooked. Drain them off and wipe this pan dry. Spray the pan with oil (I used a mixture of butter and garlic flavoured oil). Heat the pan and then add the chillis. Stir gently and after a couple of minutes add the swaths and beans and then after another couple of minutes add the lemon juice. Once all the juice has cooked off but the veg are still moist take off the heat.

Step 6: Serve up. I opened the parcels and lifted them out with a wide spatula in one go. This left the excess liquid behind although you could add this after if you want a little sauce. Place the potatoes and the veg mix on the plate any old way you fancy. I also made some gravy for my son as he was not having the squash/bean mix and always likes having gravy. 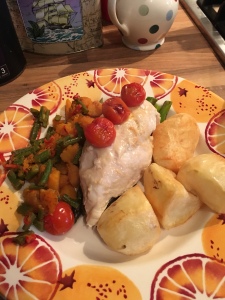