I have not always been a real fan of cauliflower unless it was coated in an unctuous cheese sauce. I always explained this saying that I could not taste the cauliflower (which begs the question of of why not coat something else in that cheese sauce).

Because of this I avoided the rice and pasta ‘alternatives’ for a long time. I have spoken before about my conversion to courgetti but also made the point it should not be treated as an alternative to pasta, but an alternative (not ‘slater native’ that first appeared here using predictive text) dish possibly inspired by more traditional ones.

Last Friday I won the SW group raffle for the third week in a row. Some muttered ‘its a fix’ as I also sell the raffle tickets. Machiavellian raffle plots aside the prize this week was for a ‘Cauliflower Rice Pilaf’. The main discussion about the prize was not in fact the use of cauliflower but the inclusion of Sumac as a flavouring for the dish. I have set it a few times but usually when coating meat before air frying.

Sumac debates also aside, like ‘Rafflegate’, I did promise to share how the dish went. Well tea tonight was based around the Pilaf. I chose also to make tandoori chicken to go with it. The product was a really tasty dish that we will be eating again. I am hoping that some of the remaining ‘cauliflower rice intolerant’ members of the group will now give it a go. I can promise no wind or bloating arises from its consumption.

The recipe comes from the SW site and there is a YouTube video showing how to make the core dish (but not the tandoori chicken). It also shows how easy it is to make cauliflower rice and how much cheaper it is than the ready made shop bought versions. This also applies to broccoli rice and courgetti/cournoodles.

My final version varies a little from the video version so read on if you want to check out my version and also how I made the tandoori chicken.

For the Tandoori Chicken 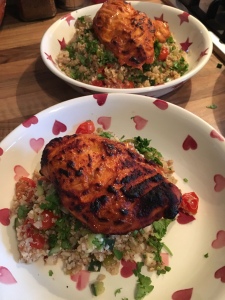