These two puddings are adaptations. One is an adaptation of one I have posted before and the other came from my Slimming World group.

This week we had a Cancer Research ‘bring a cake or pudding’ group session. Now before I go any further, if you like either of these recipes please give them a go but also make a donation to the cancer charity of your choice. We will have probably lost someone to cancer and this week we lost a member of our extended family to it. The research is making this a less likely outcome and we all want that that to be an ever less frequent outcome.

Pudding 1 is a version of my Chocolate Mousse recipe. Because it is very very chocolaty I find it needs something lighter to cut through it so I worked up a vanilla version of it to make this pudding.

If you make equal amounts of both, using the quantities in the recipe, and convert this into 10 good sized portion using equal amounts of both colours it is 2 syns a portion (for all you SWers out there).You can scale down the ingredients to make a smaller number of portions. It is best served chilled.

This picture shows it made into taster portions only.

The second dessert is a baked rice pudding. This was one is drawn from a recipe created by Cate, my Slimming World consultant. I have made some changes but even with these it is both delicious and a good option for anyone looking to lose some weight. For those of you SWers there are 4 syns in the whole thing. 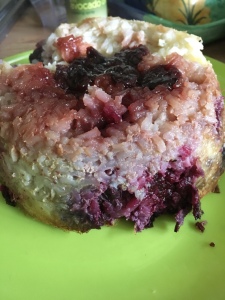