Well today was quite straight forward. It involved one old faithful, one new recipe with a twist on a favourite, and leftovers given a new identity.

This is a great one to start the day with. The recipe is already in the breakfast section so that you can look it up. I made a variation on a the theme using bananas instead of soft fruit. I also added a splash of ‘no sugar’ caramel syrup. Rather than just mix in the bananas I layered them (bottom, middle and top). It was a good combo but not as pretty as those I have made with blue berries and raspberries.

No ok, it isn’t summer yet but I thought this might get things moving in the right direction. This was such a doddle and although intended for one person half was still a large portion and Maggie is having some for her lunch tomorrow, 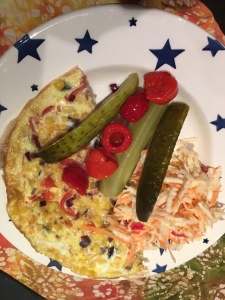 3. Season the eggs before adding, to your taste. You can add chopped chilli, chilli flakes but I have used them later.

4. Add the eggs to the pan and tip to ensure an even coating of egg.

5. Keep cooking until the egg has set.

6. Put under the grill for five minutes or until cooked on top and browning.

I served mine with a celeriac, carrot and chilli coleslaw (half celeriac grated, one carrot grated, one chilli deseeded and finely chopped mixed with light mayonnaise).and some pickled cucumber and pickled peppers. You can use a mixture of quark and creme fraiche or yoghurt (no fat version) for an even lighter dressing for the coleslaw.

I did say yesterday that I would use the left over stew today. All I did was add the left over purple broccoli and added a half tin of chickpeas left over in the fridge. I then spiced it with with a full tablespoon of Ras El Hanout spice bought at the supermarket. This was heated to be used again today. You could use a combo of cumin, paprika and cinnamon to make a spice mix if needed.

I served Maggie’s with a portion of couscous (well buttered). To be extra good I served mine with cauliflower rice. Now I do find this a bit dull and I have never been a real cauliflower fan (unless covered in cheese sauce and let’s be honest, the cauliflower in this case is just an excuse to have cheese sauce). I pan fried my cauliflower rice with chilli spray oil and added a teaspoon of Ras El Hanout spice, a crumbled chicken stock cube,a splash of water and then finished off with some chopped coriander. Yum yum yum!!! The yoghurt on top is ‘no fat’ natural yoghurt. 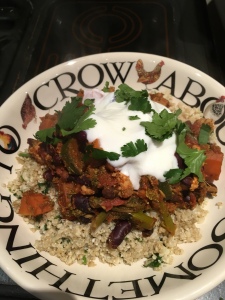